Why Approaching the Digital Health 3.0 Era for Healthcare Innovation and Founders Is the Most Critical Step

The road to innovation in healthcare is a long one. The road towards incorporating these groundbreaking solutions into everyday health and the healthcare system is even longer.

It’s safe to say we are hitting an inflection point worth noting and, while perhaps an oversimplification, looking at the evolvement of the Internet and technology becomes a measurable benchmark in comparison with the developments of the digital health space. 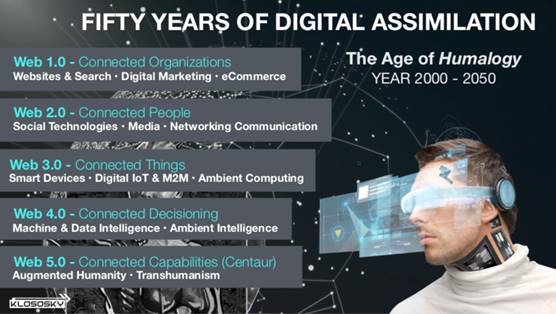 The Internet’s Development vs. Digital Health’s Development
I sat in an impressive presentation given by technology futurist Steve Klosky of TriCorp Technologies back in 2017 which really gave context to the evolution of technology and what I’m about to share below with regard to healthcare.

The public world wide web took form in 1991 (Web 1.0), and great adoption in the developing world took place throughout the 90s. By 2004, Web 2.0 was formed with the launching of social media. One to one became one to many. And in the late 2010s we realized the power of everything being connected with smart devices and using intelligence, which will lay the ground for Web 4.0 with connected decisioning, in which a majority of machine and data intelligence will aim to improve systems, efficiencies, and quality.

Now within healthcare the digital developments have certainly (and to many frustratingly) lagged, but there seem to be some breakthroughs taking place.

Digital Health’s Evolution
In the 2000s, HIPAA inclusion rules resulted in new standards for EHRs. Anything EHR related in the 2000s really constitutes Digital Health 1.0 - what would be the internet launch of healthcare systems, including automatic data backups, data encryption protections, audit trails, and access controls. 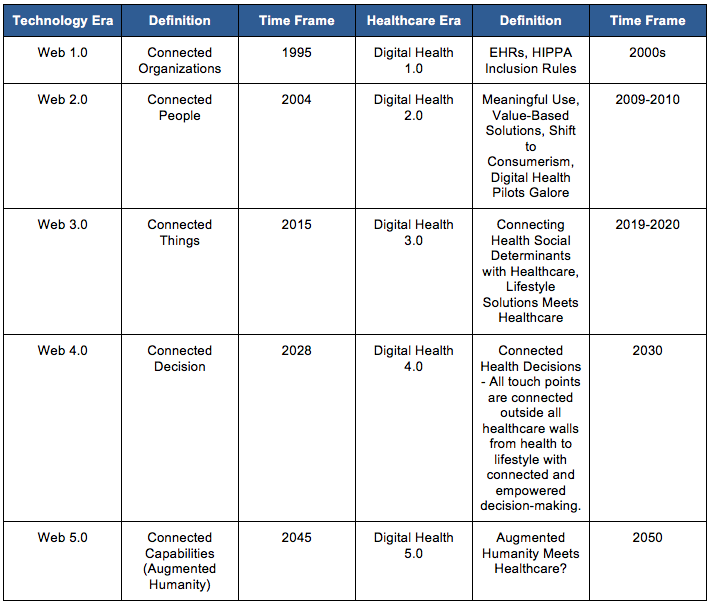 Digital Health 2.0 really swung into full force after Meaningful Use stages were introduced. An influx of single point solutions was introduced, such as condition management, virtual care, engagement solutions, and population health tools. Thus, there still were many headwinds founders encountered with reimbursement (e.g., in behavioral health) or state by state licensing procedures (e.g., in telehealth) restricting patient access, and slow-to-adopt healthcare incumbents with their own set of challenges, amongst a list too long to cover in this piece.

Some of these obstacles are fewer now, but some of the biggest developments remain, including an enforcement and opening of timely health records to patients. In September 2019, the OCR settled its first case in a HIPAA Right of Access Initiative case where a provider system did not provide timely health record information to a prenatal mother about her child. The only way this can improve is if relevant solutions connecting all end points become a reality. Hence, Digital Health 3.0.

In the 3.0 wave, more initiatives connecting overall health and wellness within our healthcare system will come to the forefront. This includes social determinants of health. The Social Determinants Accelerator Act being introduced by politicians is quite an inflection point worth noting. Stated in a previous blog I wrote, “The Social Determinants Accelerator Act (SDAA) will provide one of the most fundamental pieces of policy to improve overall patient health, and they’re looking for digital solutions beyond the four walls of a typical hospital or clinic.”

Factors such as transportation, education, access to food sources, and more are all vital considerations. The evidence is fairly clear - poor outcomes are due to a void in fundamental life components and should be a part of the healthcare system. About 99% of care for most patients is provided outside the clinical setting. Everyday life, behavior/habits, food systems, mindset, education, and fundamental human needs are as big a part of the healthcare equation as any. Founders are starting to crack that formula.

Where are we now?
After a period of innovation spanning much of the 2010s, many 1.0 technologies, coupled with the improvement of many solutions in the 2.0 wave, resulted in healthcare stakeholders (providers, payers, etc.) being up to their ears in pilots and innovation. This is what I call the “Pilots Galore” decade for digital health. Back in 2016, it still felt like enterprise stakeholders were open to new ideas and models. However, as we move into 2020, a company’s value prop and innovation must be demonstrated at this stage. Burnout for many adopters is a real thing. Pilots Galore also unfolded because many 1.0 digital solutions were lagging what stakeholders actually needed. The 2.0 wave, and now the 3.0 wave, are here to solve for those inefficiencies.

What’s also supporting Digital Health 3.0?
The FANG of Health, which is more like the WAAG (Walmart, Apple, Amazon and Google), are now clearly in the space. These players are making it known they are here to make a dent in the system. I scratched my head when antitrust claims derailed the Aetna and Humana acquisition, but then you see the tremendous disruption potential with Amazon’s acquisition of PillPack and Apple’s health record now on every iPhone. Companies selling Digital Health 1.0 and 2.0 businesses to non-traditional healthcare players (tech players) illustrates how much this industry can really change.

Successful Digital Health Founders
Founders who have been successful have likely uncovered the following:

Digital Health Accelerator, Funders and More
So, what will the future hold for founders? The launch of Rock Health in 2010, positioned as the first digital health focused accelerator and fund, led to a number of growing funding players, numerous accelerators, incubators, VCs, corporate VCs, and more.

What’s naturally happened to accelerators and early pre-seed/seed players:
Many early stage entrepreneurs are seeking to build their company and get early stage support and funding with an accelerator, something I’ve witnessed for much of the last 5 years.

But with the evolvement of Digital Health 1.0, healthcare funders evolved (or dissolved) with it. One of the following three outcomes has taken place:

Why Now Matters More Than Ever
It’s without question we are now at the most critical juncture of this Digital Health wave. Will all the investment and innovation in the Digital Health 1.0 and 2.0 eras be put to use in this next 3.0 wave? Will we bend the cost curve of $1 trillion of waste and healthcare care costs expected to constitute 20% of the GDP?

Where are the gaps?
After investing for nearly five years in the digital health space as a seed and Series A investor, it became clear there were two gaps where entrepreneurs needed help.

As funders, we noticed that some of the companies with the best execution had a business-savvy CEO and a CRO with experience that blends corporate and early stage startup experience with prior tech software sales expertise.

Data Room and Digital Health Deep Dive
For Wharton students and alums building their digital health business, we have a data room template to prep you for your fundraise, which digital health founders have used to raise seed and Series A funds. And to schedule a free 30 min deep dive session you can contact us at [email protected].